Forget About The Benefits: Storytelling Is The Key To Successful B2B Marketing

In a stark departure from the pithy and informative tone that characterises our normal programming, this post promises to be a bit of a rant. That said, it also lays out a solid blueprint for writing stand-out copy that’ll make a real difference to your bottom line. If you’re in the process of growing a brand or business, it’s well worth your time.

The problem is simple: Writing effective marketing copy is really bloody hard. Much smarter people have spent the better part of their working lives learning how to craft arguments and highlight benefits in a way that genuinely engages a reader – and compels them to take action.

When the average marketing strategist, copywriter or CMO sits down behind the keyboard and tries to recreate that magic, they often find themselves struggling against overwhelming inertia. Where should I start? What should I focus on? What would David Ogilvy say about my product?

All too often, the crippling talons of analysis paralysis send us scurrying off to look at some hackneyed collection of “foolproof” copywriting tips that are packed with over-hyped and over-shared truisms with no real bearing on the reality of a successful marketer.

People who like to talk about copywriting are rarely the people best-placed to offer useful advice. And yes, I am fully aware of the implicit irony of that statement.

Tucked away in those awful little listicles, you’ll often find one of my least-favourite gems:

“Talk about the benefits, not the features”

It seems sensible enough: people, especially modern people with their modern concerns, don’t have the time to sit and reflect on the relative merits of your product’s feature list. They can’t be bothered to think about how it would impact their day to day lives and they probably need to be spoon-fed a nicely packaged overview of the tangible benefits they should expect to receive.

In moderation, I think it can work quite well. But people tend to massively overdo it and the phrase - like all truisms - is catching. Like the Monkeypox currently ravaging our headlines, it worms its way into the minds of copywriters and then - having found itself a comfortable residence - sets about obliterating any trace of contradictory thought.

The Dangers Of Over Reliance On “Benefit Oriented” Copy

Absorb the mantra and you’ll instantly find yourself scribbling out carefully-wrought strap lines in favour of something like “saves you hours of time”, “eliminates stress” or “lets you live your best life”.

In the murky world of B2B copywriting, the answer’s always “puts your business on the map”, “lets you deliver best-in-class service” or “boosts your team’s productivity” (looking at you, Monday.com)

As the idea starts to spread from writer to writer, adverts, landing pages and social media posts all start to lose their individuality. Everywhere you look, benefits are replacing the snappy tag lines that used to make you sit up and listen.

Witty one-liners are giving way to sanitised lists of boring “must haves” that sound like they were written by someone with a tick-box checklist of things people in their (impossibly broad) target demographic are supposed to care about.

Honestly, it’s pretty bleak out there. I don’t know how many more times I can listen to a bearded man in a plaid shirt tell me that he can shave 3 hours off my working day, or supercharge my efficiency with a fancy suite of productivity tools that looks suspiciously like every other SaaS platform in existence.

But this isn’t about my personal views; it’s about the fact that this increasingly-banal and irrefutably bland way of writing web copy is starting to erode people’s attention spans. There is a very real limit to the number of times you’ll take note of someone promising to save you some variation of time, money or energy.

There’s Nothing Groundbreaking About The Formula

But if everything is framed in the same way, and our audiences are constantly exposed to near-identical messaging from a diverse array of seemingly independent brands, they’ll just start tuning us out. It’s needlessly, nakedly exploitative to keep pressing the same buttons on repeat, and our readers aren’t stupid enough to keep falling for the same hooks.

Eventually, this “language of benefits” will lose its resonance entirely and in much the same way that medical professionals are currently rushing around, trying to find a solution to antibiotic resistant bacteria, we will find ourselves sailing right down sh*t creek without a paddle. Metaphorical or otherwise

In fact, I suspect this process is already well underway. A recent study published by the Nielsen Norman Group shows that people are learning to ignore the overwhelming majority of content on a webpage. Their gaze patterns have changed, they’re less inclined to read in a linear fashion and they are - increasingly - pin-balling around web pages in search of something that stands out (source: NN/g)

But that doesn’t stop people recycling this “benefit first” advice ad nauseam. Earlier today, I stumbled on someone extolling their followers to focus on highlighting tangible benefits because “B2B storytelling doesn’t work” 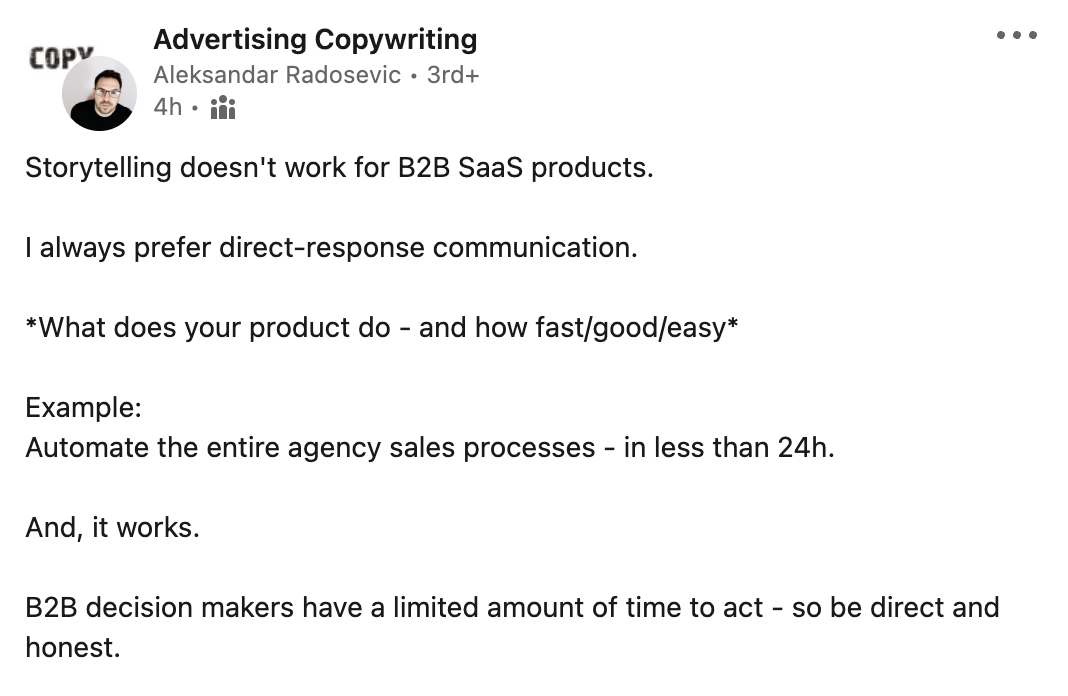 They also made a bit of a leap in assuming that their benefits-first approach was somehow more honest and direct than a traditional story. But there’s a lot of ground to uncover here and it’d take far too long to unpack all these weird misconceptions people have about storytelling so I’ll just say this:

There is nothing more honest than a real story. Even if you do embellish the truth slightly, everything you’re writing will be grounded in a reality that’s far more compelling and tangible than copy that asks people to reimagine their current situation in favour of some fanciful new reality where they’re exactly 6.5% more productive and their team is exactly 300x more motivated.

You’ll be speaking from the heart - about something you know - which always resonates better with real people. And yes, before you ask, I do think there’s a very important distinction to be made between truth and honesty.

Having thoroughly repudiated well-established methods for hooking a readers’ attention, it’s important to properly outline the alternative. It's all good and well to say “write stories” but I’m sure anyone who’s made it this far will be wondering what sort of stories they ought to tell. Especially in a B2B context, where exciting narratives are often few and far between.

Thing is, story-telling is really about framing, and if you know how to frame a story properly, you don’t really need a high-octane plot to make your point. Business storytelling luminary Bob Keiller once told a fantastic story on our podcast (that’s Digital Marketing From The Coalface, if you were wondering).

In this story, he persuades a group of high-profile investors to take a gamble and give him millions of pounds to buy out a small part of the business he works for.  He does this by asking them to close their eyes and imagine themselves in a forest of tall pines. Under the boughs, he says, we see a small sapling that’s alive, but struggling to thrive in the shadow of its taller brethren.

Carefully excavate the tree, he tells them, move it to a clearing elsewhere in the forest and you’ll see it start to flourish. It’ll put out new shoots. Its roots will dive deep into soil and it’ll push itself up into the light – until it’s standing shoulder to shoulder with the trees that used to overshadow it.

It’s a relatively straight-forward story, all things considered, but it does its job wonderfully well. The imagery is clear and evocative, the point is simply made, and the narrative isn’t one that you can really argue with.

It also makes a point that’s immediately relatable to anyone that’s ever planted a tree or thought about the delicate structure of forest ecosystems which - admittedly - may be slightly less people than I originally assumed when I started writing this section of my diatribe but we’re here now, and we’ll just have to go with it.

The point is, stories - business or otherwise - don’t have to be outrageously novel or interesting. They just have to be evocative and make a clear point.

They also have to be simple. As the much-maligned LinkedIn post above posited, people value their time and respond best to direct narratives so don’t take your audience for granted and launch into a long and complex story with no clear focus.

On The Shoulders Of Giants

There’s a wonderful (and very evocative essay) by George Orwell that does a good job of explaining the best way to write stories that engage people and avoid the pitfalls associated with a lot of modern ‘business’ writing - a much better job than I could do here - so I’d definitely recommend reading that if you want a quick start.

It’s called Politics And The English Language and it’s well worth a proper read.

But I do have some unique and original advice to share, and it’s simply this: Delve deep. Mine your own experiences, business success stories, funny pitches or ridiculous meetings. Think about real, tangible ways that your product or service has helped people over the years and then simply tell those stories.

Write without fuss, don’t try to make your copy sound pithy or clever. Focus on making a good point in the shortest possible time and then - taking a leaf out of Orwell’s book, go through and cut any extraneous or muddled imagery. After a few hours, you should find that you’ve created genuinely-compelling copy that does a much better job of engaging, compelling and delighting your target audience than some hackneyed list of generalised benefits.

We’re a bit obsessed with business messaging. From branding to writing knock-out landing pages that tramel people into giving up their personal info, we’re always looking for effective ways to communicate with prospects and turn them into paying customers.

If you want to talk about your messaging, tell us how wrong we are about business storytelling or just ask us about anything that we’ve written here, you can give us a call. We can’t promise we’ll be as ranty or as opinionated as we were here, but we can promise that you’ll get the ear of a knowledgeable expert who cares about copywriting, and business storytelling to boot.